Which star signs have the best and the worst drivers? 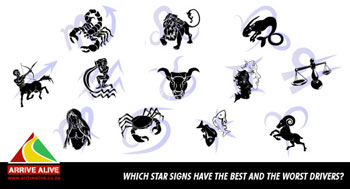 Do you believe in star signs and how people born under specific star signs reflect specific personality traits? I am not a great believer in star signs but will admit to displaying a few characteristics of the Capricorn sign – the sign for my birthday on the 11th of January!

But can we take this further and investigate whether the star signs can guide us to predict driving behaviour – or even tell us which star signs have the best and worst drivers?

I have found fascinating results from a survey by Suncorp Metway, Ltd., a multi-faceted Australian Financial Service company. This company ranked car accident claimants by their star sign in a study of 160,000 accident claims over a three-year period.

This study, released in 2002, was carried out as part of Suncorp’s annual review of claims. “We always look for trends in claims to see if there are ways to reduce our pricing, but there is no intention to introduce astrology as a rating factor for motor insurance,” explained Warren Duke, Suncorp’s national manager of personal insurance.

It is always hard to disagree with the facts – and this is what they found:

How do the personality traits of persons with these star signs explain their driving?

Second and third place holders for this dubious honor are Taurus and Pisces. “Taureans were thought to be obstinate and inflexible, “said Duke,” while Pisceans could be risk-takers and daredevils.”

Interpretation of these findings by astrologers

Astrologers have also shared their opinion and provided some interesting explanations:

Taurus
Taurus can be obstinate and inflexible, but they are also the most introverted and self-absorbed of all the signs. At a very fundamental level, the world outside the chassis of their car may not exist at all. Since freeway driving requires spatial perception and processing of much abstract information (speed, flow and distance), this is counter to their natural way of processing the world around them.

Pisces
Pisces, in the number three position, is the other sign that lives in a world of its own. Duke describes them as potential risk takers and daredevils. Pisces are the gentle dreamers of the zodiac. They may spend many hours a day in fantasy worlds, escaping the painful realities of life on the physical plane and, more often than not, the pain of being in a physical body. They often experience the whole manifest world as an illusion and their presence in it as temporary and of little importance.

This Pisces detachment from the physical can lead to unconscious feelings of invulnerability or invincibility, also to unconscious feelings of victimization and sacrifice. If you are momentarily deluded into thinking you don’t have physical limits, and that your life is but a fleeting moment in the eternal life of the soul, you can respond to situations of physical danger in illogical ways. Or, at the very least, be slow on the uptake.

Capricorns
They came last on the list of accident claimants and are typically described as patient and careful. It’s no surprise Capricorns are the safest behind the wheel. They’re the safest at everything! Their patience and sense of responsibility are legendary.

Sagittarians
Sagittarians may stay safe in their cars the same way they do in life, by having superbly developed higher minds. Another name for this mind is intuition. The highly developed sense of flow and good timing characteristic of Sagittarians is what makes them the lucky sign. Furthermore, their minds are right at home dealing with traffic patterns, flow and spatial relations.

Scorpios
Scorpios may stay safe because they are intimately involved with the inner lives of others in the same way their opposite sign Taurus is defended against this information. Scorpios are sensitive to energy— whether it is a foot away or thousands of miles away—and can feel someone “coming up from behind” at many different levels. That’s why we always feel like they can see right through us. They can.

Scorpios would be the drivers who would instinctively “wake up” in time to let a cocaine addict pass them at 95 or give a wide berth to a passive aggressive soccer mom hassling two kids in the back seat and a phone conversation with her husband all at the same time.

[Comments on the star signs by Nancy R. Fenn, a fulltime professional astrologer for more than 25 years]

What are the effects of your star sign on your car insurance premiums?

Vehicle owners need not worry that their start sign will make their insurance premiums more expensive. If you, your spouse or colleague is a Gemini, Taurus or Pisces –now might be the time to check on your car insurance policy. It might – on average- be more important to have good car insurance!!

US Car Insurance company lists most dangerous drivers by occupation

Why everyone else pays for uninsured drivers, and...